Merging guppies and shrimp in a single tank can sound like a beautiful idea, and many want to do it. They are both beautiful aquatic pets. However, is it practical?

Before you put two different kinds of aquatic species together, you must evaluate their compatibility. Make sure they have a common ground to settle and will not eat each other up!

As you probably already know, there are several different types of shrimps. The main ones being cherry shrimp and ghost shrimp.

Today, we’ll discuss whether you can keep these species with guppies, how compatible they are, and which type of shrimp would be a better selection. Let’s begin!

When deciding whether guppies and shrimp can live together, it is essential to measure their compatibility.

The Similarities Between Guppies And Shrimp 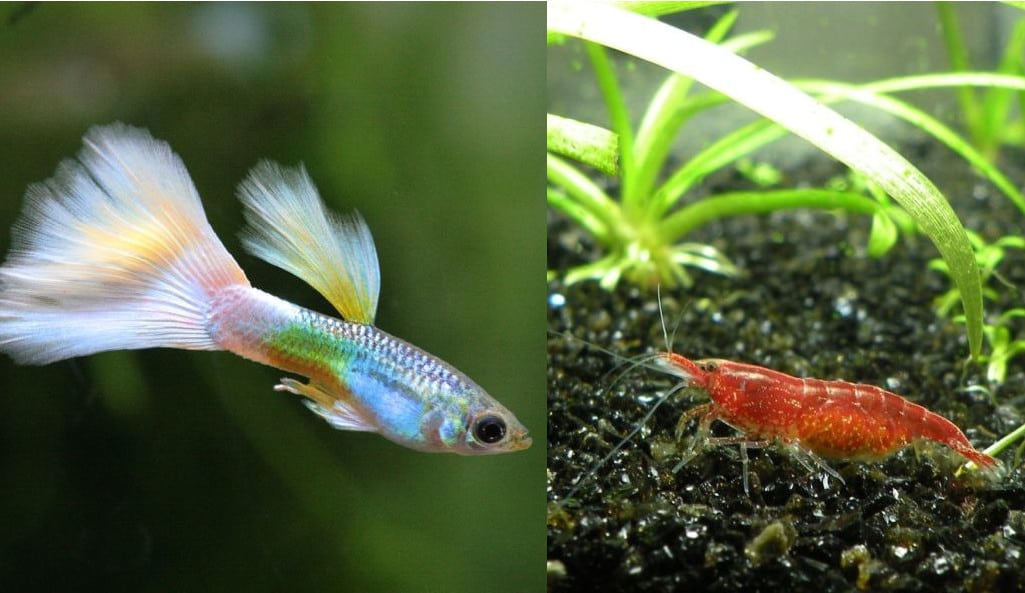 A cherry and ghost shrimp can grow about 1.6 to 2 inches, respectively. Overall, the average sizes of both these fish remain similar. Thus, they don’t need differing capacities and space.

Guppies require at least 5 gallons to live freely, while shrimps are comfortable 7 to 10 gallons. Thus, it would be best to start with a tank that offers more than 10 to 12 gallons if you plan to keep them together.

Living in a smaller, confined space can lead to guppies finding and hunting shrimps more easily.

Shrimps aren’t very picky about their food; they do well on leftovers, plant matter, and algae. Guppies are pretty similar to shrimps in terms of their food requirements.

Both species of fish are omnivorous and have some shared meal preferences, like zucchini and algae.

The Differences Between Guppies And Shrimp

Guppies are long-lasting fish. In the right care, they can live for several years, four to five at least. However, it is not rare for them to die within a time duration of one to two years.

In contrast, shrimps don’t last as long. Both cherry and ghost shrimps live for about a year or longer. This difference in life expectancy means that your original community of shrimps will not last as long as your guppies.

If you want to maintain their population, you must breed. Breeding might not be possible with guppies around since they can hunt and eat baby shrimps. Thus, if you want to breed shrimps, you’ll have to separate them in a different tank.

Ghost Shrimp Breeding – How to do?

Both cherry and ghost shrimps are peaceful creatures. They are gentle, social, and pretty much harmless. However, guppies are a different case.

Indeed, they aren’t generally very aggressive, but they remain docile. Male guppies can become significantly aggressive with each other if they don’t see females around.

They try to mark their territories and impose power and dominance over the other male fish. As a result, they resort to bullying behavior with each other and the shrimps.

While it is true that both guppies and shrimps enjoy the same type of food, there is one significant difference: guppies enjoy shrimps as meals!

Guppies enjoy live food like bloodworms, brine shrimp, and tubifex worms now and then. Ideally, guppies can do well and survive on fish flakes just fine. However, feeding them live food twice or thrice a week is beneficial as well as necessary.

How Can You Prevent Guppies From Eating The Shrimps?

If you are going to put shrimps with guppies in a single tank, you must take necessary precautions. Given that the former is part of the guppy food chain, not taking vital steps can lead to a catastrophe in your aquarium!

If you’re going to put shrimps and guppies together, make sure that you add the former first. Let them create a colony in the aquarium.

Once their population starts to thrive and grow, you can add the guppies. Doing this reduces the chances of the later eating up baby shrimps.

Give plenty of food

There are two reasons why you should monitor and maintain a fair amount of food in the tank.

One: guppies are less likely to eat the shrimps if they are full, and their hunger is satisfied on time.

Two: shrimps can do well on leftover food, but guppies might not leave any for them to eat. Indeed, shrimps can also survive on biofilm and decaying plants. However, as a result of malnutrition, their growth is relatively slower and stunted. Shrimps require proper coverage, both for playing and hiding from the predator, i.e., the guppies. So, you must provide lots of plants and moss inside the aquarium.

Popular recommendations and options will be:

If there are more guppies than shrimps in the tank, the former will become dominant and eat up the latter species.

This fact is especially true for adult guppies and baby shrimps; the two don’t make a good match. Thus, you must maintain the ratio of the two species in an aquarium.

Guppies And Shrimp Together In A Tank? – The Final Verdict

In a nutshell, guppies and shrimp can live together in harmony. However, the former species will likely eat up the latter, especially cherry shrimp. By taking the necessary precautions and providing the right environment, you can help them coexist without hurting each other.

If you fail to do what’s necessary, you’ll start noticing a dramatic decrease in the shrimp population. In fact, it won’t take more than a few months for your shrimps to disappear from your aquarium completely.

3 Ways To Keep Geese Out Of Your Pond

Ghost Shrimp Breeding – How to do?