4 Tips On Algae Control With Barley Straw In Ponds

Algae can be a very destructive force in any natural pond, and thus it is no surprise that people will go to great lengths to try and remove and destroy any algae in their ponds. In fact, algae can transform a well-maintained, much loved pond overnight, from an oasis to a vision of hell.

It is every responsible pond owner’s worst nightmare. However, tackling this menace doesn’t necessarily have to be a herculean task, nor do you need to use potentially harmful procedures or chemicals.

There are a variety of home-style recipes that have been shown to be effectively in removing the algae problem.

In this comprehensive article, we will review one of the strategies; the use of barley straw. We will explain how to use barley straw to control algae in ponds and evaluate just how effective this treatment is against the pernicious threat of algae.

As a general rule, before you set out to tackle a problem you should understand the fundamentals of the issue. Many people just associate algae as that green scum floating on the top of their pond, but there is a bit more to it.

Algae is a general term for a number of different species of aquatic vegetation. It can come in a green-mat form, or a stringy filamentous form, as well as a few other variants. It varies from existing as very basic single-cell organisms to larger, complex organisms.

Beyond the aesthetic damage that it can do to your beautiful pond, algae can also be a threat to the balance and the life in your artificial ecosystem. This is because, during the night, when algae is unable to photosynthesis, they still consume large amounts of oxygen.

This can put a huge strain on the resources of the pond and can quickly deplete the level of dissolved oxygen in the pond. Fish and other plant life require dissolved oxygen to metabolize and continue respiring.

Thus, a sudden growth of algae can quickly have a very damaging effect on your pond, potentially killing off dozens of fish. The speed of their growth can be quite alarming, and lead to the situation getting out of control very quickly.

What Is Barley Straw? 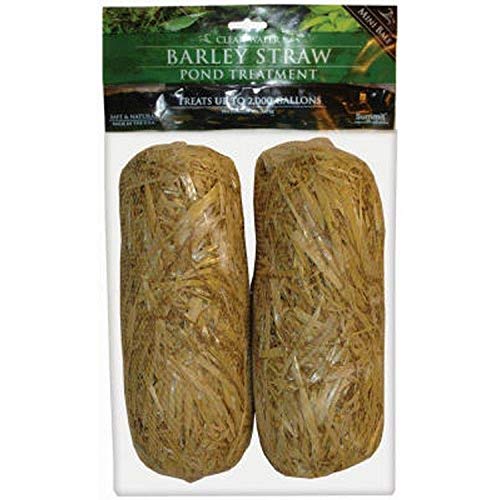 Barley straw has been known as a home remedy for algae infestations for many centuries now.

It has been available for far longer than modern solutions such as algicide, since it dates back to a more agrarian time when barley straw was universally available.

So, what exactly is this barley straw?

Barley is a type of grass that is very commonly grown as fodder to feed animals such as horses and cows, and also as a major cereal grain for consumption by us.

After, this is harvested, the stalk of the grass is usually left behind, and this can dry and harden in the summer sun. This can then be later made into bales’ which are large packets of dried barley stalks. This is commonly used as bedding for animals to keep them warm, and occasional as feed.

The use of barley straw to control algae has been passed down for generations, and its success is quite anecdotal. It is a remnant of an earlier age when these kinds of bales were available everywhere, but they are now relatively easily sourced online.

The important question remains, do they actually work?

There is considerable proof that algae is controlled through the use of barley straw. This includes both anecdotal evidence and actual concrete studies conducted by industry and universities.

It has been shown to keep the population of a number of types of algae under control (i.e. prevent their populations from growing), when it is used in sufficient quantity.

However, there is not much universal agreement about how it works or even what kinds of algae it is effective against. There is considerable evidence that its efficacy varies a lot from one algae type to another, and sometimes it could even increase the population of some rare forms of algae.

Researchers have reported mixed reports in the past, with some finding it to be successful against diverse groups such as planktic, filamentous and even blue-green algae.

It is best used experimentally, so a trial and error process is advised. Simply, use some barely straw, following the recommendations outlined below, and monitor the progress carefully.

How To Use Barley Straw To Control Algae In Ponds

Most researchers agree that Barely Straw does not kill algae. This means that if you already have a large growth of algae in your pond, you will need to use other methods to clear the immediate problem.

For example, you may choose a chemical solution, or simply get in and clear out the water by hand.

However, barley straw is known to prevent the growth of algae. For this reason, the term algistat is often used to distinguish it from algicides, which kill existing algae populations. As eluded to above, the exact details of how it works is still not know.

Most researchers postulate that as the barley straw decays it releases chemicals into the water which curtail the algae populations. There are also some competing theories that suggests that the barley straw encourages the growth of algae predators.

The exact details of the mechanism are not very important. It is important to realize that barley straw is only a good preventative measure, to impede the growth of algae in the first place, not to tackle existing problems.

How Much Barley Straw To Use?

This is a very common question, and unfortunately scientists have not arrived at an agreed conclusion, and researcher have used very different amounts in their studies. Barley straw is usually sold in small bales’, so this is a useful quantity to refer to.

As a very general rule of thumb, you should allow 4-5 bales per surface acre of water. This is suitable up to large, commercial sized ponds. So, for most small garden ponds, half a bale will be more than sufficient.

Alternatively, you can allow one pound of straw per every 2000 gallons of water in your pond.

How To Deploy The Barley Straw?

You might be wondering exactly how to use barley straw to control algae in ponds. Well, with larger lakes or ponds you might be able to just set the bales loose on the water and allow them to float. With smaller ponds, it may take a bit more work.

You should stuff the barley straw into nets or pods to loosely collect it together and use a bit of sting to tie it to shore. It is very important that the straw floats on the water, so you may have to connect the balls to something buoyant.

It is very important that the straw is broken up and fluffed. It should not be dense and heavy. This ensures that there is good flow of water around the straw, which is essential for it to work. You should distribute the straw evenly around the pond if possible. 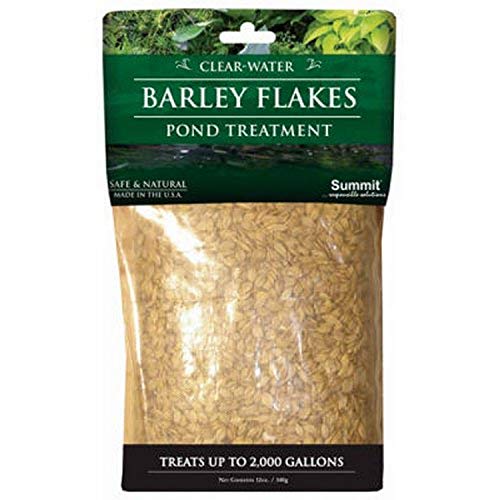 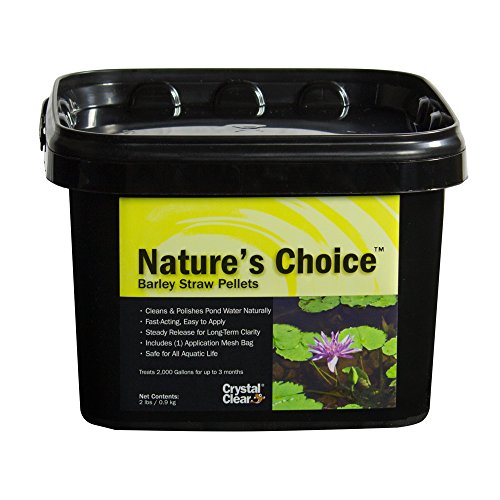 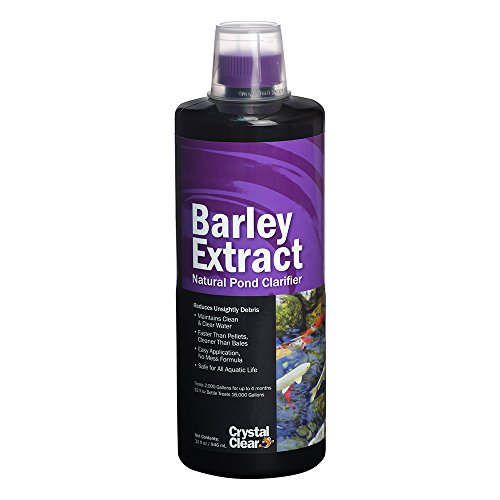 What Conditions Are Needed?

For barley straw to be most effective at controlling algae, you will require some conditions to be met. Firstly, it works best in highly oxygenated conditions. This is the reason why the barley straw should not be submerged; it needs access to the high levels of oxygen in the air to work.

It will not perform well in anaerobic conditions, so you may also be required to aerate your pond to increase the level of dissolved oxygen in the water. Also, some research has suggested that barley straw is less effective in waters with high nutrient levels.

This means you may have to reduce the level of ammonia or phosphates present before you can really tackle your algae issue.

5 Ways To Aerate And Oxygenate A Pond

Is It A Pesticide?

Many people worry about using pesticides or algicides in their pond because of the knock-on effects they can have on the ecosystem. You don’t need to worry about this with barley straw.

Barley straw is an entirely natural remedy which is not classed as a pesticide by the US Environmental Protection Agency.

If you’re looking for an easy and effective method to prevent and control algae blooms, then barley straw may be exactly what you want. In this article we have explained exactly how to use barley straw to control algae in ponds and pointed out some of the uncertainties about how it works.

It is a cheap and cheerful method, so there is no harm in experimenting with this form of algae reduction in your pond. Just make sure to use the correct amount, oxygenate your water, and make sure that the barley straw floats on top.

Thankfully barley straw is a widely available commodity, and if you have any farmers in your area they might be able to source you some directly!

What To Use Instead Of Pond Liner? Top 7 Alternatives

3 Ways On How To Hide Pond Liner

What Do Pond Snails Eat?

How to Use Aquarium Salt for Freshwater Fish

How Long Can Fish Live In A Bag?